Current standard or regular production cigars are normal cigars that are in continuing factory production and are commercially available worldwide. Not every cigar will be produced every year, but they remain available for distributors to order and will be produced whenever supplies run low.

Discontinued production cigars are standard cigars that have been officially confirmed by Habanos S.A. as discontinued. They are no longer available for distributors to order.

Some cigars may not have been produced for many years before they are officially discontinued. Conversely, other cigars might be produced for another year or two after discontinuation to fill any standing orders and use up remaining packaging stock. Discontinuation dates on this website therefore reflect the official date of discontinuation, not final production.

Many discontinued cigars can be obtained (at a premium) in the vintage cigar market.

In 2003, Habanos S.A. introduced the Habanos Selection (Selección Habanos) releases. These boxes consist of a number of different cigars of the same size from different brands.

In the early 1960s several brands had regular selection releases, which were normally several different sizes of standard cigar presented in a single box.

La Casa del Habano is a worldwide chain of franchise stores, the first of which opened in Cancun, Mexico in 1990. The name and logo are internationally registered trademarks of Habanos S.A. Some stores (mostly within Cuba) are operated by Habanos S.A. itself. Internationally, the way the franchises are run varies based on region: in some areas, the exclusive distributor for the region owns all the La Casa del Habano stores. In other areas the stores are franchised to individuals.

The Habanos Specialist programme was developed by Habanos S.A. around 2012. It is a designation given to independent tobacconists that meet certain criteria with regards to the range of Cuban cigars they carry, storage conditions, and staff training. It is administered by the exclusive distributors in their markets. There are around 500 Habanos Specialist stores worldwide.

Cigars in this category are exclusively available at Habanos Specialist and La Casa del Habano stores. They are produced indefinitely in somewhat smaller quantities than standard production. Since 2016, they have worn a special gold band that denotes this series, and tend to have higher end packaging.

Habanos S.A. regularly releases a number of different types of special production cigars. They are generally limited in quantity, and are usually distinguished by new vitolas, different packaging, special bands, or the use of specially aged tobacco. They may form part of a regular series, or be a once-off commemorative release. They generally command premium prices on both the primary and secondary markets.

In 2000, Habanos S.A. introduced the Limited Edition (Edición Limitada) Series. This series comprises cigar vitolas that are not in current production.

Initially, the cigars were manufactured using two year old aged wrappers from the upper level of the plant, to produce a unique darker colour. Since 2007 all of the tobacco (wrapper, binder, and filler) is aged for two years.

Early years of the programme saw four or five different Limited Edition cigars released each year. In 2002 there were no releases, probably due to the late release of the 2001 cigars and the lack of suitable two-year old wrapper tobacco, as Habanos S.A. may have underestimated the success of the Limited Edition concept. Since 2005, there have been three cigars in most years (with a few exceptions).

Limited Edition cigars normally have two bands; the standard production band for their brand, and a second black on gold band with the text "Edición Limitada" and the release year. The band on the 2000 release did not include a date.

Images of the Limited Edition bands

In 2005, Habanos S.A. introduced the Regional Edition (Edición Regional) programme. This series gives the distributors an annual opportunity to commission special exclusive cigars for their region.

In the initial program, the cigars could not be commisioned from the ten worldwide premium Global and Niche brands. Since the 2019 re-organisation of the brands, the niche brand category has been dissolved, and Cuaba and San Cristóbal de la Habana have become eligible for Regional Editions (the status of Trinidad is still unclear). In some cases discontinued brands have also had regional releases, and in one instance an entirely new brand was created. The cigars must be a standard current production factory size that are not already available in that brand. Since 2016, regions cannot have a cigar from the same brand two years in a row. Up until 2012, distributors were able to commission multiple cigars per year. This was subsequently limited to one cigar per region, although large distributors are still able to commission multiple cigars by specifying different regions within their territory.

Each release is initiated by the distributors, who approach Habanos with an idea for a release which Habanos will either accept or reject. The distributor specifies how many cigars they would like (minimum order of 25,000), and pays for the cost of the production up front. If they would like specialty packaging, then they are responsible for sourcing this. Habanos will produce three prototype blend options, and the distributor will pick the one that goes into final production. In some cases, a second batch of the cigars may be produced in the year after the inital release.

Regional Edition cigars normally have two bands: the standard production band for their brand, and a special red and silver band with the word "Exclusivo" and the name of the region in Spanish. In some cases, a special band is used in place of the standard one. Early releases used a generic band that did not state the region name. Prior to 2005, a number of distributors were able to commission exclusive cigars with no special bands or markings.

Images of the Regional Edition bands

This series consists of special large format cigars packaged in numbered boîte nature boxes in the form of a book. The 2001 release contained 10 cigars, but most releases since then contained 20 cigars. The number of books released has varied from 300 to 2,000. Normally, the cigars wear the standard band for their brand.

This series comprises of standard production sizes made with specially selected tobacco, aged a minimum of three years before rolling the cigars.

The cigars have Reserva second bands in addition to their standard bands, are packaged in special lacquered boxes, and sell at a premium price point. They are released every second year (alternating with the Grand Reserve series).

This series comprises specially selected tobacco, aged for a minimum of five years before rolling the cigars.

The cigars have special Gran Reserva bands in addition to their standard bands, are in special numbered lacquered boxes, and sell at a premium price point. They are released every second year (alternating with the Reserve series).

The final released in late 2002 was due to a quantity of the original jars being rejected (mainly) due to lid imperfections. These boxes bear a OSU Nov 2002 release code.  These jars contain the 1999 production cigars, which were stored until replacement jars became available. There were also various other private commissions and special gift cigars produced with the "Millennium 2000" bands.

In 2011 Habanos SA released select range of aged regular production cigars including Hoyo de Monterrey Le Hoyo de Dieux in 50s, El Rey del Mundo, and Vegas Robaina. The cigars were aged more than five years (up to ten years) and were identified by the addition of a special Añejados band, an internal notice, and a Revisado stamp on the base of the box. The cigars were only available in Cuba in fairly limited numbers. 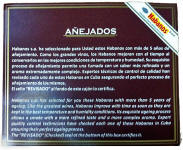 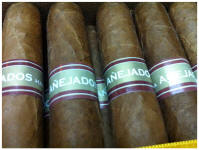 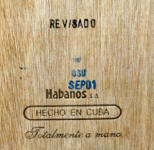 These cigars are aged in their boxes for five to eight years before release. The boxes are stamped with the original roll date, along with a Revisado stamp to indicate that the cigars have been inspected. They wear a special Habanos Añejados band in addition to their regular one.

Initially, the cigars in this series consisted of two releases per year of unique and discontinued vitolas in global brands. In 2016 the program saw just a single cigar, and then ceased.

Items in this series are released exclusively for sale in Duty Free and Travel Retail stores. They are generally marketed as luxury gift items. They are usually travel humidors, although there have been examples of both jars and tube sets in this category. They have contained both standard production and special cigars.

This series comprises premium quality replicas of antique humidors, issued in very limited quantities, at a substantial price premium. They normally contain 50 cigars in a non-regular production size (it is often a recreation of a long discontinued vitola). The cigars normally have the standard bands for their brand.

An old El Ray del Mundo factory was converted to produce these and other special humidors.

This series is composed of premium, large format cigars from Global brands. The cigars are released annually around the time of the Chinese New Year. They are launched in Hong Kong, but globally available thereafter. They are packaged in luxurious red and gold boxes of 8 or 18 cigars and have footbands depicting a Chinese zodiac animal. 8,888 pieces are usually produced.

Chinese New Year falls in late January or early February, while new Cuban cigars are generally announced at the Festival del Habanos in late February. The 'release year' of Año Chino cigars, therefore, is considered to be the year they are announced, which for these cigars is the year before the year that they celebrate.

The distributor for Spain, Tabacalera S.L.U., had released cigars with Chinese Year packaging prior to 2019, however these were a just a private repackaging of regular production cigars.

Commemorative Humidors are released to commemorate special occasions or anniversaries (generally at least one per year).

They are commercially available to the general public, in limited quantities, and at a premium price. They usually contain cigars in unique vitolas, normally with special bands unique to the humidor.

Although certainly a commemorative humidor, the Siglo XXI Millennium Humidor is given its own category on this website, as its 2,000 cigars overwhelm any list of commemorative cigars.

This category covers cigars produced for special occasions that are deemed significant enough to be included in this website.

This category includes all other official and commercially available special releases that are not Commemorative Humidors or do not form part of any special release series.