Status
H. Upmann is a current pre-Revolution brand, established in 1844.
It is now classified by Habanos SA as a Global brand, but prior to c2007 it was only classified as a Multi-local. It has a significant market share

Generally
The range comprises light to medium strength cigars, using tobacco from the premium Vuelta Abajo region.
There is a non-Cuban brand with the same name.

Current Production
Until 2008, all the current production cigars were pre-1960s releases. Since then there has been subsequent releases.

Special Releases
There was special pre-1960 packaging that was discontinued in the 1980s.
Special Releases commenced in 1999 with the inclusion of H. Upmann cigars in the Siglo XXI Humidor.
Since 2004 there have been further Special Releases.

Special Connossieur No.1 band
Construction:
Handmade.
Bands:
No bands before c2005, then standard bands B, then C, then special Connossieur No.1 band from 2021.
Packaging:
Slide lid box of 25 cigars.
Varnished semi boîte nature box of 10 cigars (released 2014, discontinued 2014).
Status:
A pre-1960 release. 1960-01-01Current.
History:
A single batch of cigars in 10 count boxes was produced and sold in Havana during the 2014 Habanos Festival. These cigars had a Festival XIII band in addition to the standard B style band. Some boxes from the same batch were available worldwide after the festival, reportedly without the special bands. There is some confusion about the spelling of the name of this cigar. Since launch, it was spelled "Connoisseur," however since the introduction of the Connossieur A in 2013, some boxes labeled "Connossieur" No.1 have been reported. The special bands added in 2021 use the "Connossieur" spelling, as does the gold ribbon inside the box, however, the outside of the boxes continue to use the "Connoisseur" name.
Brown H. Upmann Connoisseur No.1 Cuban cigar.
H. Upmann Coronas Major
Eminentes
Ring gaugerg 42 × LengthMMT132 mm (5¼″)
Corona

Construction:
Handmade.
Bands:
Standard band C, with La Casa del Habana band.
Packaging:
Glass jar of 25 cigars (5,000 produced).
Status:
A 2009 release. 2009-01-01Current. Not available until late 2010.
A second batch of these cigars appeared in 2013. It is unclear whether these were part of the original 5000 or a new allotment.
History:
These cigars were standard production cigars, sold in similar glass jars, until the early 1980s.
Brown La Casa del Habano Exclusivo release of Cuban cigars.
H. Upmann Half Corona
Half Corona
Ring gaugerg 44 × LengthMMT90 mm (3½″)
Petit Corona
3.59587

Connoisseur No.1 - a standard production size

Upmann No.2 - a standard production size 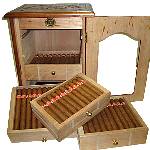 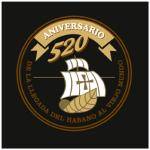