Status
Cohiba is a current post-Revolution brand, established in 1966.
It is classified by Habanos SA as their Global flagship brand, and has a major market share and is sold at a premium price.

Special Releases
Special releases commenced in 1996 with the release of the 30 Aniversario Humidor & Jar.
Since then there have been numerous special releases.

History
In 1963 Cohiba started out as a Fuma (a cigar rolled by a torcedor for his own use) that was offered to Fidel Castro. It immediately became Fidel’s favourite.
In 1964, a small factory was set up to make these cigars. Production was later moved to the present El Laguito Factory.
This original cigar was an unnamed Laguito No.1, and in 1967, two addition sizes were added....a Laguito No.2 and a Laguito No.3.
The cigar brand remained unnamed until 1966, when it was officially named Cohiba.
In 1969 the three cigars were given commercial names and the packaging and band designs finalised (see Standard Band A).

Robustos No.2 - a new special release size.
Construction:
Handmade.
Bands:
Standard band E, with second Habanos Specialist Exclusive band.
Packaging:
Black lacquered boîte nature box of 25 cigars.
Status:
A 2019 release. 2019-01-01Not yet available.
History:
Cigar was 'launched' at an event in Spain in 2019 and a small number of boxes may have been available to distributors at that time. A few others have been given out at various events in Havana, and in a few one-of-a-kind humidors. The cigars have never been released in market in any quantity.
Brown Especialista en Habanos Exclusivo release of Cuban cigars.
Cohiba Ambar
Placeres
Ring gaugerg 53 × LengthMMT132 mm (5¼″)
Robusto Extra

An Example of a Custom Diplomatic Band 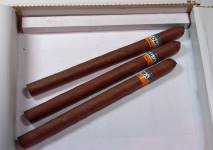 Cohiba A - a special event release 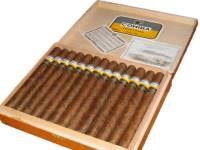 Cohiba A - a special release size

Sublimes No.1 - a new special release size.
Construction:
Handmade.
Bands:
Standard Band E, with Limited Edition 2017 Band.
Packaging:
Varnished slide lid box of 10 cigars.
Status:
A 2017 release. 2017-01-01Released November 2017.
History:
When this cigar was first announced, the factory name was given as Cañonazo Doble, however, by the time of release it had been changed to Sublimes No.1. A second batch of these cigars (reportedly 200,000) was rolled and released in 2019. The tobacco used in this second batch was from the same harvest as the initial cigars.
Brown Edición Limitada release of Cuban cigars.
Cohiba RobustoReserva Cosecha 2014 Reserve Series
451
Robusto
Robustos
Ring Gaugerg50 × LengthMMT124mm (4⅞″)
Robusto