Status
Saint Luis Rey is a current pre-revolution brand, established around 1940 by a British firm. It was imported exclusively into the UK market until the 1993.

Production was always fairly small, and starting in the early 2000s the line has been gradually reduced to a single cigar produced for copyright reasons.

Prior to the 2019 marketing classification system, it was considered a Local brand, with a focus on the UK market. Under the current system it falls in the Other category of portfolio brands. It receives an occasional regional edition release.

The range consists of full strength cigars, using a blend of tobaccos from the Vuelta Abajo and the Semi Vuelta regions. 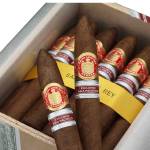